Y'all Mother Fuckers Want to Talk About Peace, Give Up Entitled Cruelty Bullshit!

Do you believe you're entitled to take a life because you like the taste of that being's flesh? Do you believe it's yours to “take” and if you don't “take it” you're “giving it up.” What a sacrifice!

Do you believe your taste for someone's flesh entitles you to pay someone else to take their life?

Or maybe you’re a hypocritical, ignorant vegetarian (like I was) who won’t eat flesh, but has no issue eating mother’s milk and menstrual cycles of certain animals. Pretending or blinding yourself to the massive cruelty, pain, suffering, and death those "products" cause in equal or greater measure as "meat." Selective caring. Some people label themselves "vegetarian" but still eat all manner of fish and other sea creatures, as if they are not animals, as if they do not love, suffer, and feel pain.

It was never “yours" to take in the first place. You have no right to their life. You're not “giving up” anything, except cruelty, speciesism, killing innocent beings, destroying the planet you live on, health problems, and unbelievable levels of violence >> on a massive scale >> on a daily basis. If you think giving up that stuff is too much… maybe we really are different species after all.

But still, You deserve your life, as all species do.

Being one “type” of human doesn't make you better than other “types” of humans. And being one type of animal doesn't make you better than other animals. Oh yes, humans are animals too! Why do people believe that they have a right to kill another being just because it's a different shape or color or has a different level of hair or fur? Cause you like the taste of their flesh? 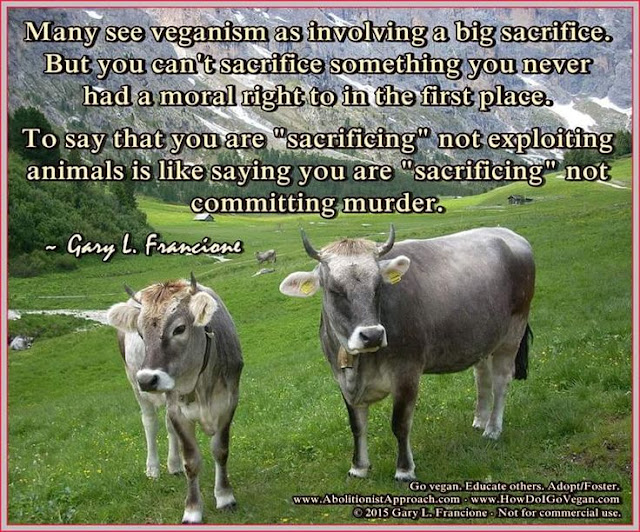 Y'all mother fuckers want to talk all about peace, not allowing violence and hatred to be the ruler, but from this vegan-point-of-view, it looks like violence, speciesism, thinking you're better than others, thinking that some life has more value than other lives, is ruling most people's minds, no matter who you voted for.

Humans are animals just like all the other living creatures on this planet. If you truly want to stand up, speak out, live and show up for nonviolence, love, acceptance, kindness and peace, start with your breakfast…(add lunch, dinner, snacks, desserts)...

How anyone can stand here, chewing on the flesh of an innocent being, while spewing intolerance and hatred against what they claim is racism, intolerance, hatred, entitlement, “white supremacy”, what about human supremacy? Speciesim, the belief that the life of some species has more value and/or rights than other species.

Some animals are deemed loving, kind or wise. Others are considered food. Others are evil, or dangerous. Animals representing various "human" qualities, whichever each particular society choices, with variations everywhere. Most kid's stories are told through animal characters, with varying personalities and traits, ranging from the best to the worst. Animals and humans, all creatures living on this planet, deserving equal consideration for life, space, freedom, the right to the pursuit of happiness in their own manner, free from domination, violence, and control by another group of creatures.

Do you not believe that people born into violent societies, who have beliefs different than your own, when it comes to, women's rights, circumcision, child marriage, slavery, sex slavery, arranged marriages, forced covering of hair, head, face, and/or body, sects of religion promoting violence on others, do you not believe these people ought to rise above these indoctrinated beliefs and just "SEE" how incorrect they are? To just "KNOW" better? To be able and willing to SEE JUST HOW terrible and violent and unfair these practices are?

Or ought we be "tolerate" of violence, oppression, and cruelty worldwide because, "that's just the way they do it over there?" Should we speak up, peacefully, nonviolently, but firmly and with conviction? Against practices of exploitation, cruelty and violence in our World?

When it is YOUR turn to honestly look at YOUR society's practices that may be cruel and violent and destructive? Or to look at your own personal practices that are promoting, contributing, and directly causing pain, suffering, violence, cruelty, torture, and death to so many lives, human and nonhuman? Or destroying our Earth?

When is it your individual responsibility to learn something new. To learn that no animal deserves nor WANTS to be killed for your consumption. That it is WRONG to take their life. It is wrong, regardless if you were raised this way, lived this way for 40 years, 70 years, whatever. The time comes for each person to question what they’ve been told and sold.

Especially if cruelty is involved! And the deaths of billions of innocent creatures.

How many cultures can you think of who have cruel practices which you believe are wrong? DO you believe they should somehow JUST KNOW!?! They should SEE that it’s cruel!!! Despite years of indoctrination! They should FEEL the pain they are causing!!! Yet, do you? Do you see the pain you are causing? By eating animals? And drinking and eating their mama's milk and menstruations?

“Judge a man by his questions rather than by his answers.”
~ Voltaire

“Monsters exist, but they are too few in number to be truly dangerous. More dangerous are the common men, the functionaries ready to believe and to act without asking questions.”
~ Primo Levi

“Very few beings really seek knowledge in this world. Mortal or immortal, few really ask. On the contrary, they try to wring from the unknown the answers they have already shaped in their own minds -- justifications, confirmations, forms of consolation without which they can't go on. To really ask is to open the door to the whirlwind. The answer may annihilate the question and the questioner.”
~ Anne Rice, The Vampire Lestat

“Courage doesn’t happen when you have all the answers. It happens when you are ready to face the questions you have been avoiding your whole life.”
~ Shannon L. Alder

“In all affairs it's a healthy thing now and then to hang a question mark on the things you have long taken for granted.”
~ Bertrand Russell

“Peace cannot be kept by force; it can only be achieved by understanding.”
~ Albert Einstein
Posted by Love Living Peach at 9:54 AM
Labels: give up, give up cruelty, give up entitlement, go vegan, meat is violence, stop eating animals, stop eating dairy, stop eating death, stop eating eggs, stop eating flesh. whole food plant based, vegan