We are not one being in one place at one time. What is time? What is being?

What is time? What is being? What is time travel? How is it useful, practical, real and magical?


We are infinite beings temporarily existing as finite beings. We are ultimately absolute beings who exist eternally, temporarily existing as ephemeral, perishable transient beings trying to make sense of our limited human perception sensory experiences through the great big unmanifested unknowable mystery of everything that we can sense which senses we don't learn about in school. And often don't understand at all.


So-called extrasensory perception. Dreams. Fantasies. Imagination. What is the real magic power of these mysterious yet accessible abilities that we have as humans.


The following is an inner being/ higher knowing download that I am opening up to and allowing to be broadcast, and received through the tool of the human body I have, and the cell phone on talk to texting this on. An app I'm using to create the audio version. And all of the human Creations that are allowing me to get this out of my mind and into a an electronic version of an audio file of words that aren't  made up of sounds. Join me on a journey into your imagination, into the past, into the future, and most importantly into your very precious present moment of right now we're all of these magical powers are tools that you can use in your own life for your own benefit. For your own Joy. I hope you enjoy this journey.


We are not one being in one place at one time. What is time? What is being?


Before we are born we are in at least three places at once. Vibrational energy in the egg. Vibrational energy in the sperm. And the vibrational being of life itself which is everywhere and also inside those cells. Studies have shown that far from the fastest, strongest sperm being the sperm that gets in, the egg chooses the sperm based on the vibrational alignment match.
» Click here to Read more »
Posted by Love Living Peach at 2:22 PM No comments:
Labels: Abraham hicks, alignment, allowance, allowing, always reach for the better feeling feeling, create love, heal abuse, healing practices, magic, time travel

Shift from a human marriage to a spiritual marriage 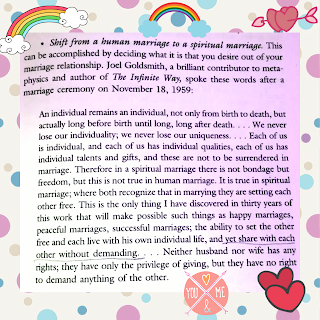 image: page 133 of dr. Wayne Dyer's book real magic. a quote from Joel Goldsmith on the difference between human marriage and a spiritual marriage. Check the blog or my Instagram at KatLoveNotWar to see and read the quote.

As I ask myself these questions and explore the possible answers, I read to find love to mean something that feels good for everyone involved in that love