Some people have the false belief that vegans think they're better than others.

Well, just as not all meat-eaters have the same personality, or cows or chickens or fish or pigs for that matter, true, there are some asshole vegans. There are some people who fall into spiritual materialism (vegan or not), and somehow start to believe that their beliefs are the only ones that matter. Anyone can get preachy and intolerant of anyone else.

Not everyone is well-adjusted or able to handle the stress of seeing so much exploitation and death around them, while maintaining a calm demeanor. I wonder how many abolitionists in slavery times were labeled “Angry Abolitionists” by slave owners and profiteers. Or by the consumers who paid much lower prices for products that were made and processed by slaves.

Ironically, it's meat eaters who often think that they're better than vegans, as well as better than the animals they choose to have slaughtered for their taste preferences. At the very least, they believe that the life of those animals has no value greater than their (the meat eater’s) taste preferences. They tell themselves things, life, the hierarchy of the food chain, the cycle/circle of life, lions though. #omnivorelife [insert eye rolly face]

Yes, there are people and places where cats, dogs, and even humans are eaten for a variety of reasons. Would you date a cannibal? Are you a cannibal?

If you connect to all life, and feel that all life is one, then eating animals feels like cannibalism.

<<, you understand that you are not better, more entitled, or more “Justified” to “take” or end anyone's life for your pleasure, profit, or gain.

Some people “go vegan” to lose weight or for some other reason that has nothing to do with true veganism.

Some people give up going vegan because they feel that they've lost their muscles or they're sick or their addictions and Cravings are too intense and they can't handle it. It’s “too hard”, “too much sacrifice” or they just don’t feel like changing or being different than others or different than how they once were.

I've long believed, since childhood, that some people just are wired to enjoy flesh, while others are wired to make the connection with living creatures, thus deeming it impossible to enjoy their flesh because, how can you eat your friends?

But does being “wired” to like or love the taste of another creature’s flesh entitle us to have it? There are lots of things I like the taste of, but for health reasons, or moral reasons, or environmental reasons, or reasons related to living nonviolently, I have “given up” these items that I used to enjoy.

So back to the idea that asshole vegans feel better than meat-eaters and my beliefs are right and yours are wrong….Am I RIGHT for believing that animals have a right to their own lives that outweighs your tastebuds? Are you RIGHT in believing that animals are here on earth for your pleasure, profit, or use that considers only your purpose and not their needs, rights, comfort, family bonds, right to life and life itself? Yes, that’s a biased question, the way I worded it. How would you word it?

Yes, I believe the purpose of animals on earth is for human’s to do with as they please? Yes, I believe animals are a form of food that just happens to talk, walk, think, act, feel, love, suffer, feel pain, have family, fight death, and all, but they are basically vegetables. With faces. And blood. And lifespans that lasts decades longer than, let’s say, a carrot. A carrot, which grows and then has a small amount of time when it is ripe and edible. Then it rots and becomes inedible organic matter again. Yes, I believe, an animal is in the same category as this. Huh??

But is Earth offering you this? Is Earth offering Pussy Grabs to anyone who wants to enjoy the fruits of pussy because it’s here on Earth so therefore, they are entitled to grab it, despite the wishes of the pussy owner?

And equally the meat-eater/vegetarian is entitled to completely control the life of the animal they wish to procure something of, whether it be their mother’s milk, their menstrual cycles, their skin, or their flesh or ALL OF THE ABOVE!

Maybe you don’t eat or wear any of that stuff, but you still visit zoos and circuses and aquariums for “education”. Believing that looking at a caged, imprisoned animal for a few minutes, while they spend their entire lifetime jailed, teaches you and your kids anything worth knowing about them. Rather it teaches that any creature can be enslaved, caged, and stared at for our entertainment, disguised as “education”.

Take one minute to really learn anything about any of those creatures, and you will know, that FIRSTLY, they don’t want to be enslaved and those cages or tanks are not it’s HOME!

So you truly believe that animals are here for your use? You just see the world this way and people like me, vegans, are self-righteous, preachy, and need to just stop?

Definition of personal1 :  of, relating to, or affecting a particular person :  private, individual 2 a :  done in person without the intervention of another; also :  proceeding from a single personb :  carried on between individuals directly 3 :  relating to the person or body4 :  relating to an individual or an individual's character, conduct, motives, or private affairs often in an offensive manner 5 a :  being rational and self-conscious b :  having the qualities of a person rather than a thing or abstraction 6 :  of, relating to, or constituting personal property 7 :  denoting grammatical person8 :  intended for private use or use by one person

Where in here does it say, personal choice is extended to the life, safety, happiness, and conditions of ANOTHER? It doesn't, because it’s NOT personal once it stops being about YOU and starts being about ANOTHER BEING. Even definition 2b :  carried on between individuals directly, could never mean, one person killing another person/creature. That's carried out by one person, company, or industry on a victim, an unwilling participant in a cruel and vicious act tied into a pretty bow of delicious, humane, sacrifice of life, for your gluttonous pleasure. Eh? Eww. And No!

Spend a little time with any creature and see if your heart is untouched.

In this world people stand in awe at the beauty of a swallow, a wren or a finch. You can stand outside watching and hearing the beauty of a little bird, then take a bite of a chicken’s breast or thigh and swallow it?!

You can appreciate the beauty of a deer, then bite into the flesh of a cow? Maybe you’ll eat the deer too. But a gazelle! Ahh such beauty! Such magnificence!

You can glean the specialness of a whale, or a dolphin, yet eat a dead salmon, tuna, crab, lobster, trout, bass, cod….shall I go on?

There is so much hypocrisy it really does make one’s head spin!

Oy vey! Get educated!! Get Compassionate!! 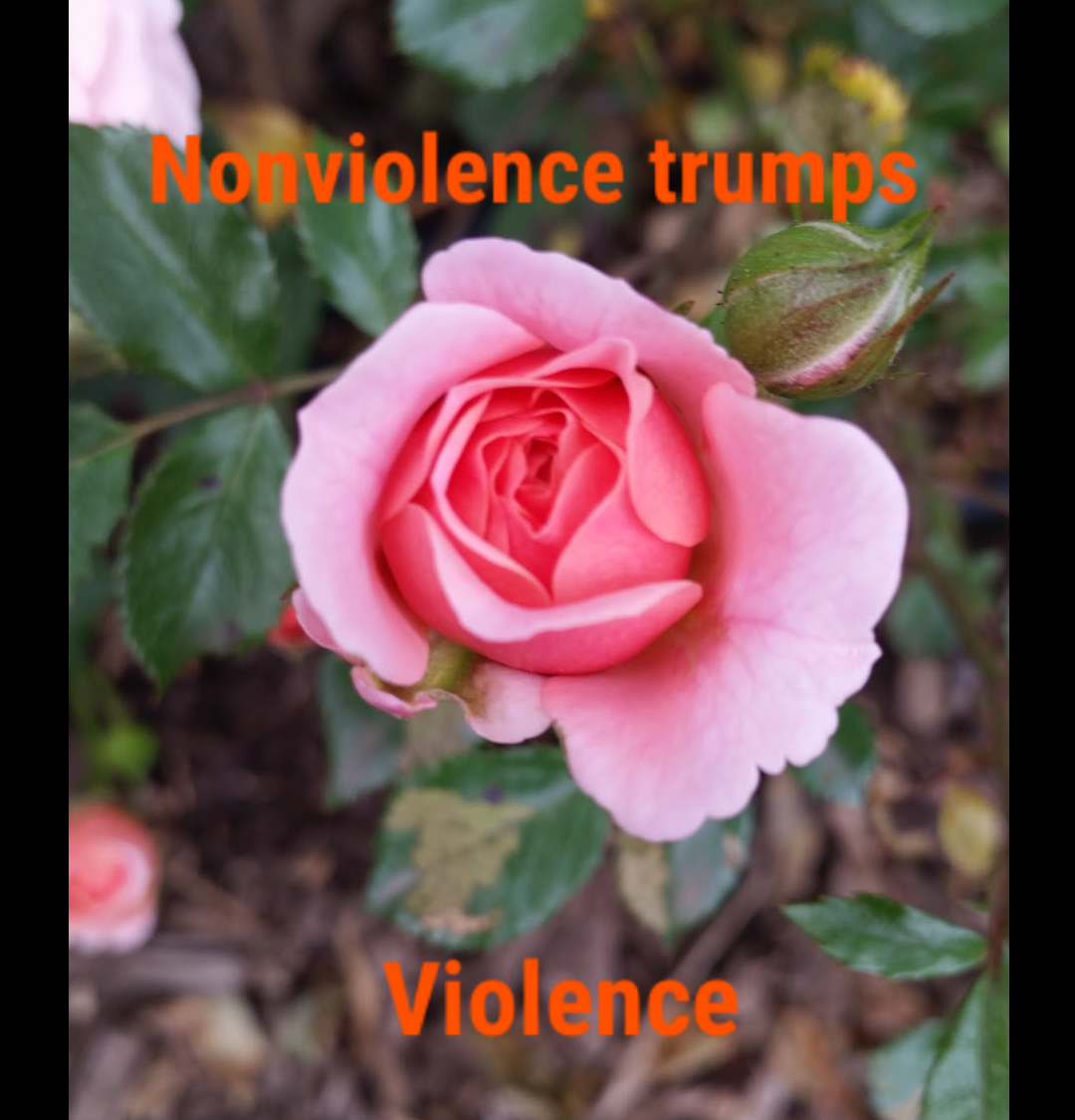 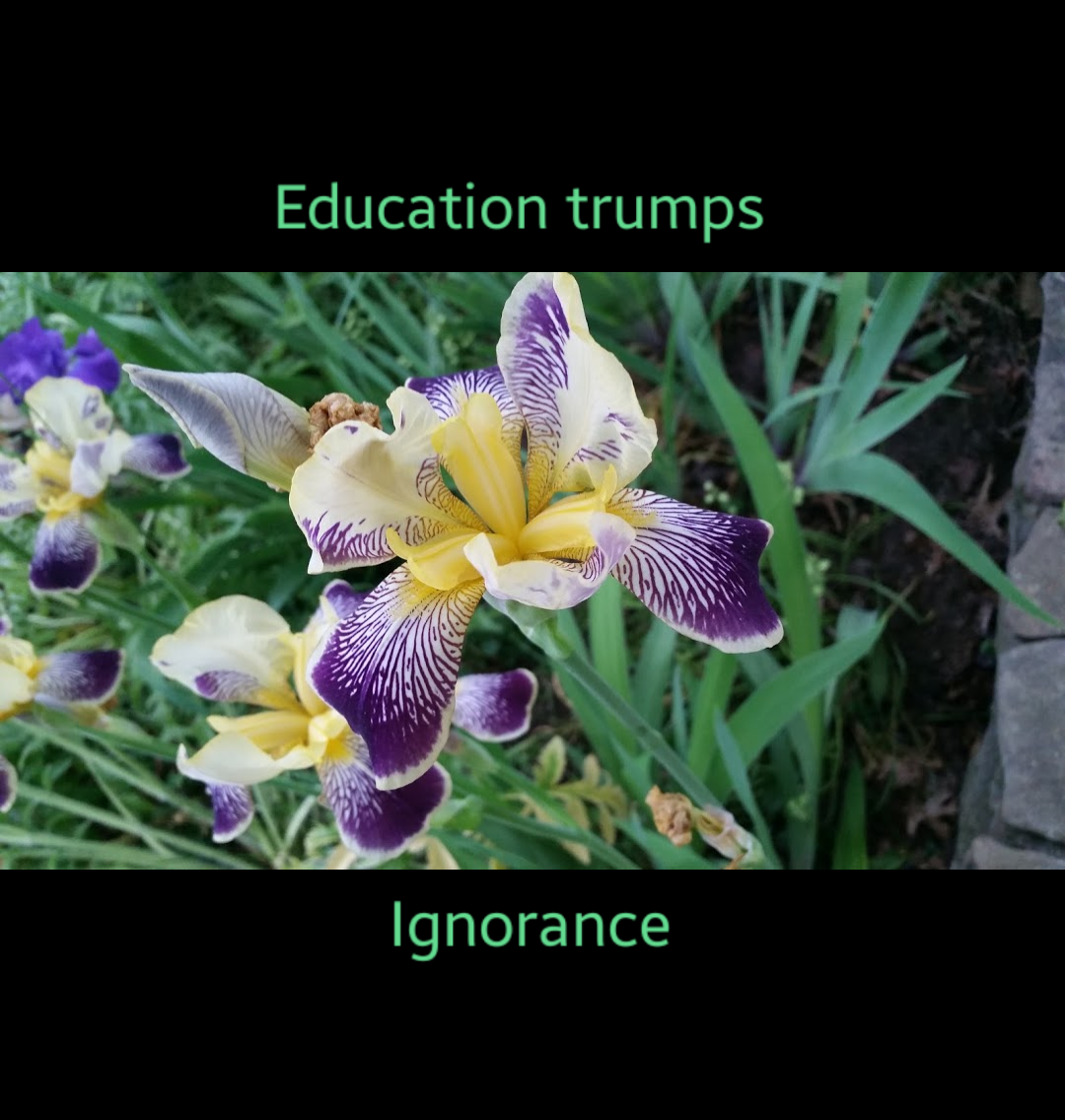 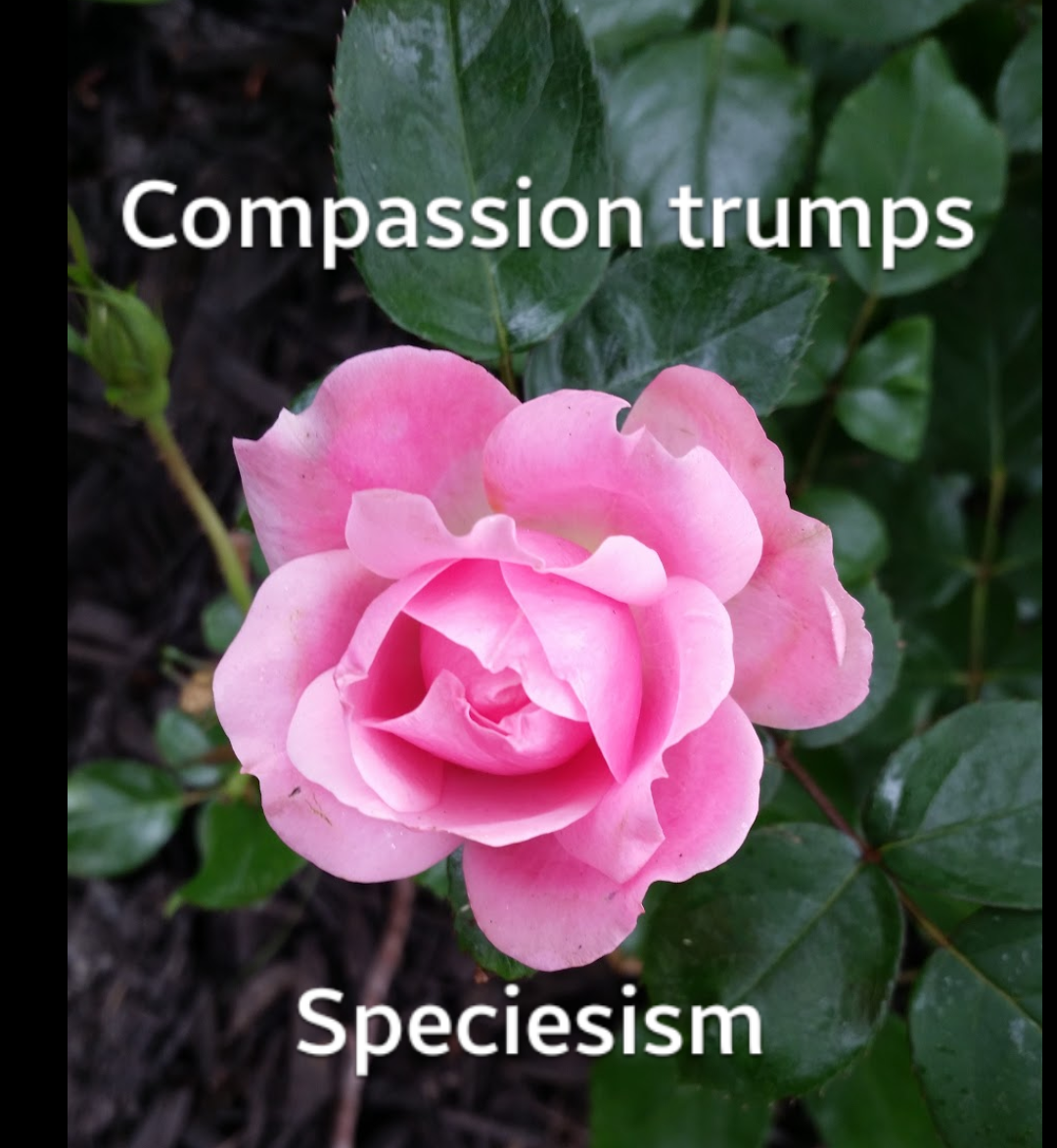 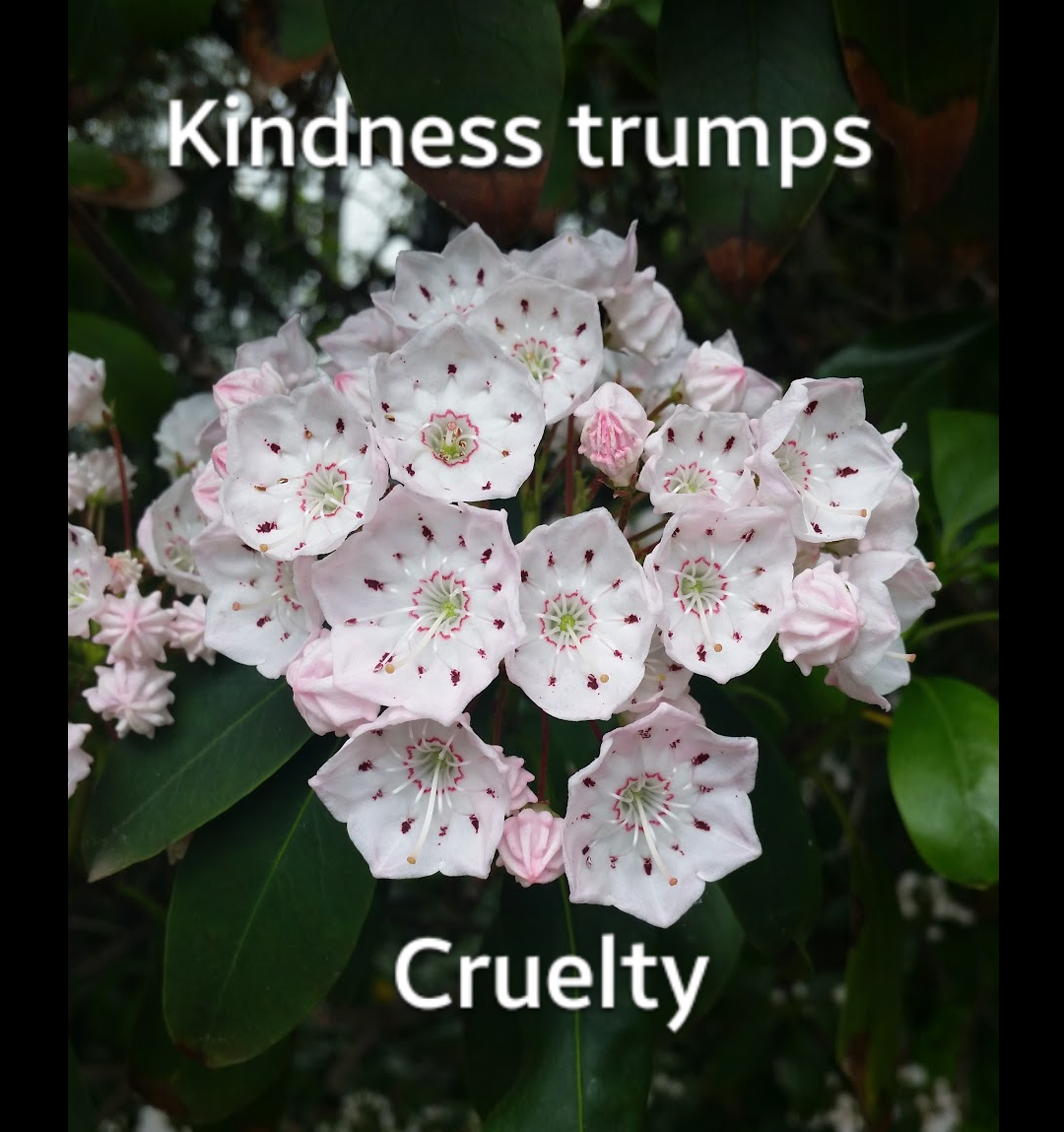 That’s right bitch, I said it! If I seem to lack compassion for meat-eaters and vegetarians, what I lack compassion for is willful ignorance. Refusing to acknowledge the value of other life forms is very difficult for me to feel compassion toward. But my hope is that by showing others how important all life is, through a variety of forms, will open their eyes.

Sometimes my opinion is biting and bitchy.

The past few days has sparked my impatience because so many people are in a rage about the Hillary Clinton/Donald Trump election, with Trump as the so-called winner.

The violent speak, intolerance, and hatred being thrown in every direction from every side is disheartening. There is SO MUCH LOVE AND TOLERANCE if only it would be extended to all as a daily practice!

I believe this election calls out the out-dated system which seems to have malevolent intentions that wish to skew a system in an unfair advantage to a certain group of people already benefiting unfairly from the exploitation of others. Yes the actual candidates may be unfit and undeserving of office, but the system in place is unfit to serve us.

Just as the system of Carnism, which so many still can not even see exists, serves a select few in a group that profits from the exploitation all of involved, but themselves. That's the worst part of this whole system! The very people fueling it and keeping it alive and thriving, are the ones suffering from it's existence. Carnism. Capitalism. 2-Party systems that are really 1-party systems. The belief of freedom while caged in your beliefs.