The ONLY ONE specific person who has the ability to make you happy is YOURSELF. 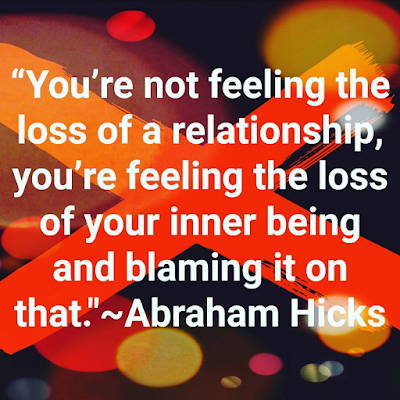 “Well if you believe that only ONE specific person can make you happy, and that person’s gone, then you’re in deep Doo-Doo. “And you know why that thought feels so awful? It’s because it’s a ridiculous, stupid thought!

“It’s because your inner being knows for sure that’s not the case.

“So when you say, ‘You’re the only one for me, and you’re not here.’ and you feel awful, awful, awful, awful, awful. The reason it feels awful, is not because the person isn’t in your life right now, it’s because, you’re using that person not being in your life as your excuse to pinch yourself off from your inner being whose thinking an entirely different thought about that.

“You can feel so much worse than this relationship is worth. Because you just get tapped in to ALL LOST LOVE. But, why do that, when you can tap into the energy that creates worlds?” ~ Abraham HicksAbraham Hicks 2017

This is true. To an extent... The beauty and connection that we find in certain souls from the way they act, the way they touch, the way they make us feel. To the physical characteristics, smile, hair, smell, body type, customs, hygiene, religious beliefs, sexual preferences, right to the actual climax and orgasms of love are ALL unique to the individual. When you lose the perfect combinations described above - settling for second best and not acquiring that level of lust conquering love can be disappointing.

I agree that we get very attached to the specifics of an individual. But if we look deeper into these specifics that we fall in love with, we can see that these specifics are still just reasons that we give ourselves to Align Ourselves With Source, or too align ourselves with our inner joy.

Of Course, people's specific details become the very details we tell ourselves are THE DETAILS that ONLY THIS ONE PERSON HAS....but the truth is that when we are aligned with our inner being of joy, WE ARE THE DETAILS OF JOY!! Surely we can notice wonderful aspects of others. I too believe certain specific people are JUST SO PERFECT for me SPECIFICALLY. But I can still recognize that is it MY ALIGNMENT WITH SOURCE AND JOY that I am feeling when I look upon them.

Whenever we believe that someone else "MAKES US FEEL"....then we are handing over our power and our joy. WE make ourselves FEEL! And we use others as our excuse to either FEEL ALIGNED or FEEL MISALIGNED. Once we recognize the FEELINGS are ours, and the responsibility of our feelings is Ours, we can likely bring more of these amazing connections of love and beauty into our lives.